My girlfriend is from the South and introduced my metropolitan palate to the glory that is grits. Now it’s a staple not only in the pantry but on backpacking trips as well.

Allow me to go out on a limb and declare grits as one of the few backpacking meal superfoods. It packs incredibly well, sticks to your ribs, it can be made sweet or savory, it’s affordable, quick cooking, and easy. Pretty much anything and everything a backpacker can ask for!

While it doesn’t pack a lot of calories, it makes up for it in other very tasty and convenient ways. The most important of which is packability, much like couscous, grits will let you pack significantly more food into a given volume of space than any other grain or pasta. Ultralighters and long distance hikers should make note of this, especially those who are required to store food in a bear bin.

Those of you who have had a fair share of grits probably won’t be terribly impressed, but for all the grits eating neophytes, prepare your gullet for a delectable creamy backpacking meal that will fuel you up and make your mouth do a happy dance.

You’ve got a number of options, I’m a fan of Bob’s Red Mill Corn Grits, which looks a lot like corn meal. However, grits and cornmeal are not the same and cannot be used interchangeably. So don’t make the mistake of using cornmeal if you can’t find grits. Sometimes it’s also sold as polenta. But I don’t know, or care enough, to figure out the difference between the two; they seem the same at least according to Bob’s Red Mill.

Alternatively, the better option for backpackers on a meal mission might be the ‘instant’ variety made by Quaker Oats. Cooking regular grits doesn’t take too long, typically on the order of 20-30 minutes but most of that is spent simmering while covered, so you can do other things. Instant grits on the other hand takes a miniscule 5 minutes, and I don’t know about you, but being able to stuff my face 15-20 minutes sooner is a very alluring promise.

For the most part, this backpacking recipe is vegetarian due to the use of artificial bacon. While I’m not typically a fan of artificial bacon, I use it primarily for its incredible shelf life. Also, partially because it tastes half decent and because it adds some texture to an otherwise pretty mushy meal.

If you’re not a fan of fake bacon and you’re not going out for very long, you could use real pre-cooked bacon instead. Some stores sell it in a shelf-stable vacuum packed form. If that still skeeves you out, this also works incredibly well with unflavored beef jerky (there's even bacon jerky); so you meatasaurus folks can still enjoy! 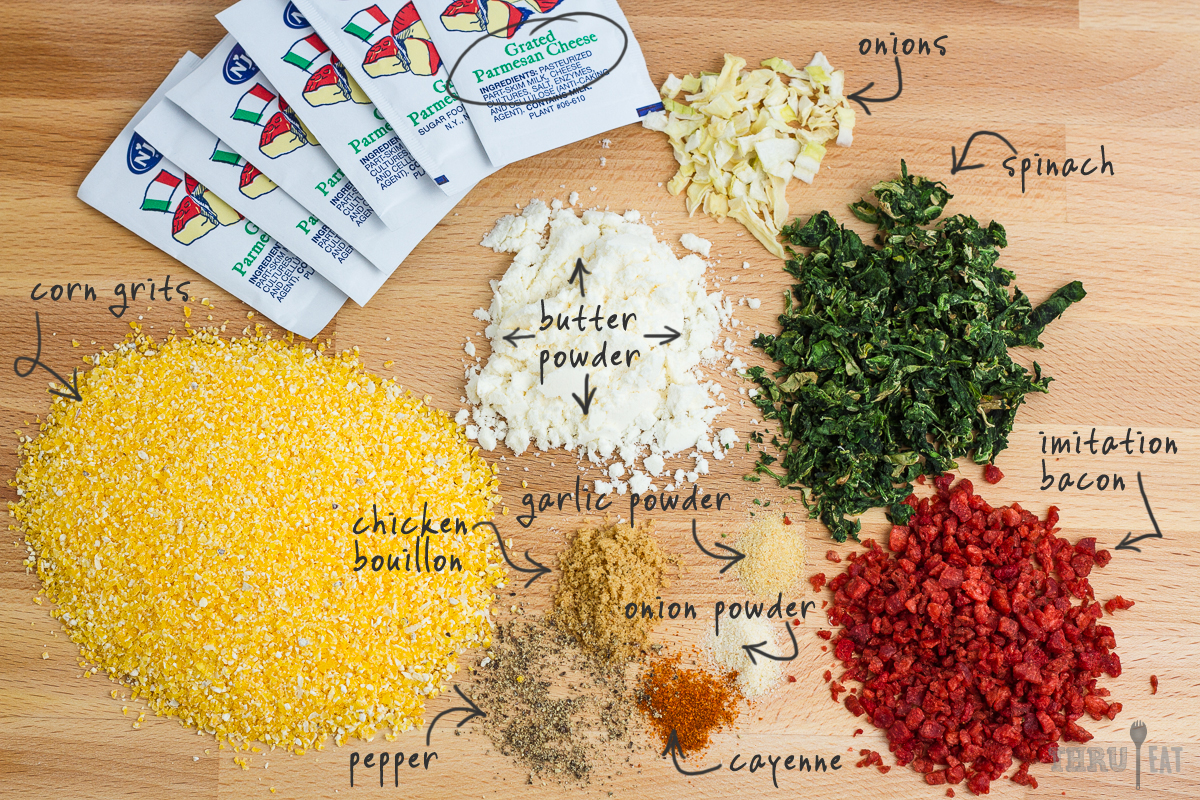